Multimedia response and interactivity are key requirements in the digital signage field today. However, the applications of multi-touch monitors are varied and extend from the educational and cultural areas as public administration system at the POI via kiosks at railway stations, airports and trade fairs to interactive applications such as retail POS. Some terminals are exposed to the elements and extreme temperatures for outdoor use, while others are in more demanding environments and must be protected from possible vandalism. The place of installation as well as the substantive concept and the usability significantly determine the selection of the different touch technologies.

Particularly robust solutions, ideally suited for continuous operation (24/7) in a public space or industrial use, offer multi-touch terminals (PCAP) working with the projective-capacitive touch technology. This technology offers an impressive performance despite its robustness touch. PCAP operates with a sensor network of electrode pairs, which are integrated as a transparent coating in the glass surface and produce a field which acts outwardly. By pressureless touch the disc, the electromagnetic field is affected between the electrodes and the touch position can be accurately calculated and passed on to the controller by changing the electrical capacity. In addition, the technology also supports multi-touch functionality in contrast to conventional resistive touch screens. The multi-touch feature detects dimensional gestures such as wiping and leaves or control gestures with multiple fingers like zooming by turning, spreading or closing the fingers.

Because the projective-capacitive touch technology is not controlled by pressure sensitivity, the surface of the screen does not be elastic. The front glass is such terminals with a hardness of 7H highly robust and ensures high durability and scratch resistance. The touch functionality of projective capacitive display remains unaffected, even if the cover glass on the screen is scratched or dirty.

CDS PCAP displays are classified according to IP54, meaning they are protected against dust and splashing water. In addition, the monitor can also be operated with suitable gloves or pens with magnetic tip. This makes PCAP displays suitable for industrial applications, eg for use in production facilities and control rooms. 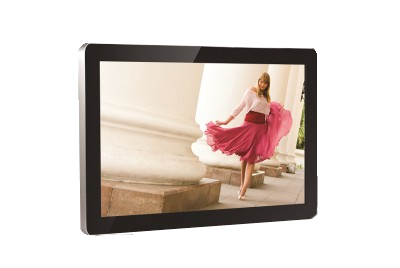 Despite their robustness, PCAP displays offer perfect picture quality even in direct light or with a large viewing angle. CDS offers nine different models of PCAP 15-32 “and both stand as well as open frame display for seamless integration into counters, furniture, totems etc. The edge-to-edge design of the glass surface has no interfering edges and ensures not only the safety glass with good surface protection and easy cleaning ability and optimal use Win 8.